Heralds of Ruin, much like a warband of Bezerkers, is all about the community. Without the playing, photographing, arguing and enthusiasm this game would be nowhere. I wanted to give some of the members their chance in the spotlight (a risky prospect in wartime, I'll grant you) and plenty of volunteers stepped up.

First in the line of fire is Marco Andrä, better known to most of you as "Marco with the amazing Arbites"! Go crazy! Raise the roof! Now calm down, citizen, or I'll let this cybermastiff loose on you. 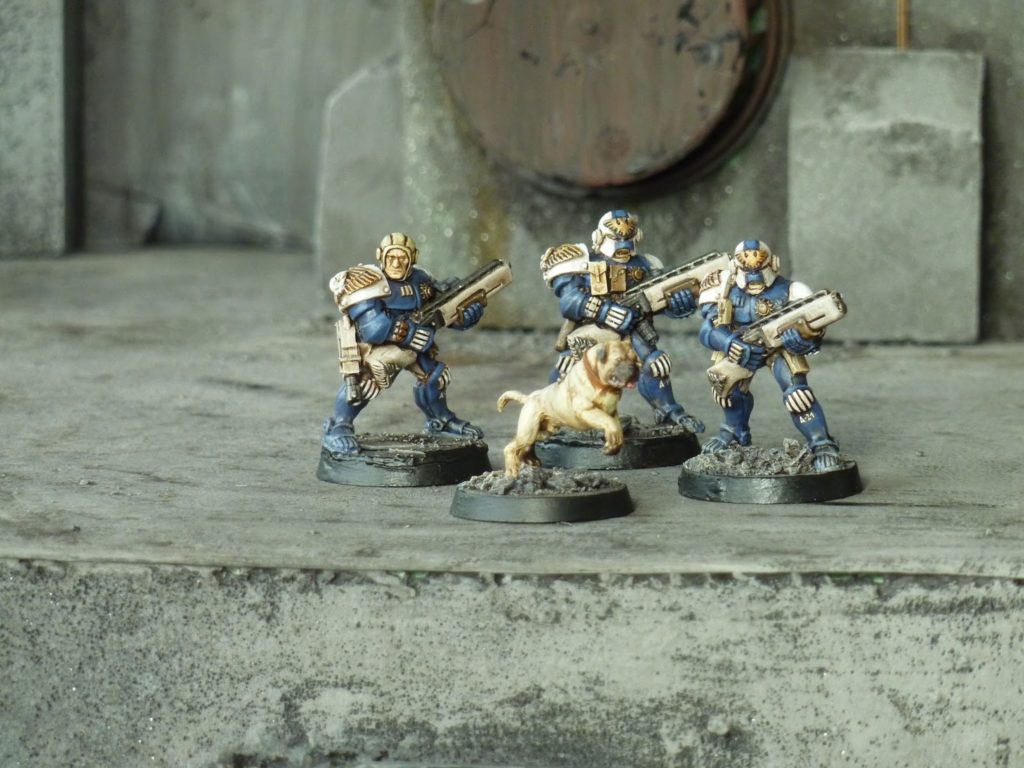 Marco's been in the wargaming game since 1997, which is roughly when 2016's average GW customer learned to walk, so I'm looking forward to getting some pearls of wisdom from this space cop. I get one straight away: his kids, 3 years and 12 weeks old are too young for 40k. Noted. My heart is breaking for the first time either of those children get their hands on a paintbrush, mostly because I know they'll be better than me immediately. 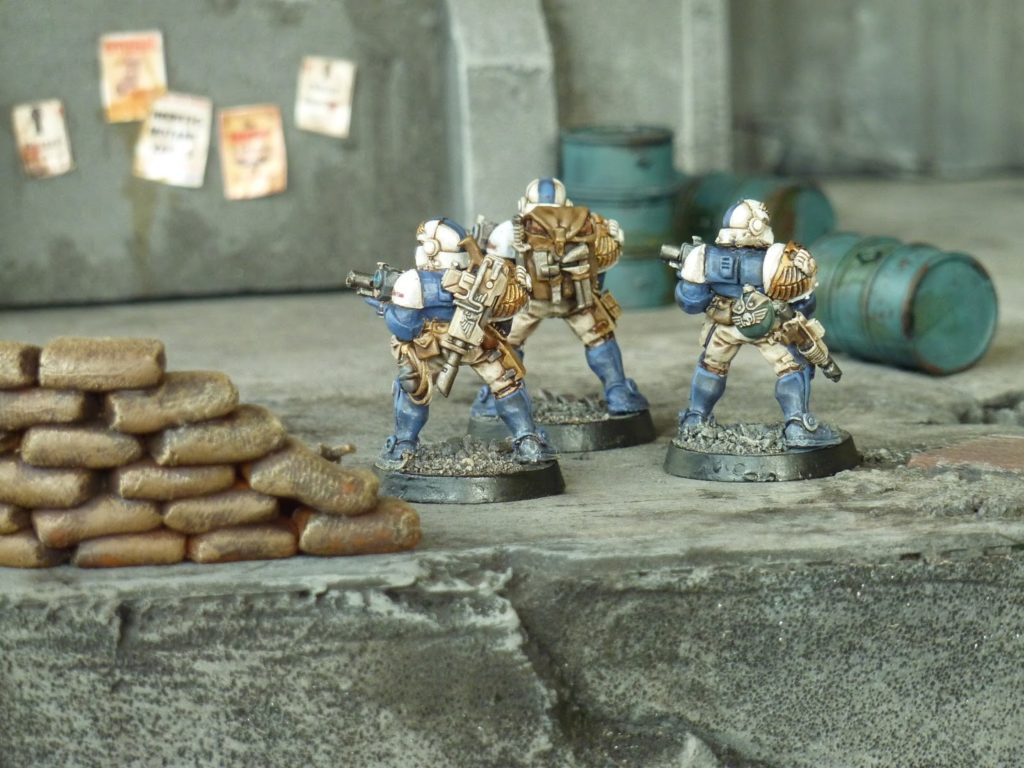 A combination of a love for Necromunda in the early days and a strong 40k gaming group in the area led Marco pretty directly to a Heralds career in the Arbites. I sense a soft spot for the "little guy" armies that don't see much love from the corporation. In the ever-increasing grimdark, the space police force might seem less and less relevant, but they're unsung heroes in the finest Heralds of Ruin tradition. They quash planetary rebellions, daemon incursions and cult cells before anyone ever gets to hear about them. I think they even managed to get Ghazghkull on a tax avoidance charge. And even if they are utterly corrupt, who isn't in the 41st millenium?

With fingers in many Imperial pies, Marco's also building Inquisition and Rogue Trader teams, and plans a Sororitas team in future. This sounds like nothing short of a takeover bid to me, and I for one can't wait to see them. Just as I'm ready to accuse him of being a total Faction Hipster, he lets slip that he's got a neat 5000 points of Imperial Fists too, an entire battle company! No shying away from the poster boys either, then.

His firm favourites, these Arbites are another product of the hobby's mostly-wonderful community. Trading groups online and mates with spares made it easy to expand the Necromunda squad into a fully fledged kill team. But are they good at their job?

Long story short, we'll have to wait and see! The Legacy list and the Ready To Test edition of the Arbites in HoR will both be getting put through their paces in a campaign starting soon against a whole bunch of Tau, a whole mob of orks and some mechanicum robots, below, who you might recognise from the group. 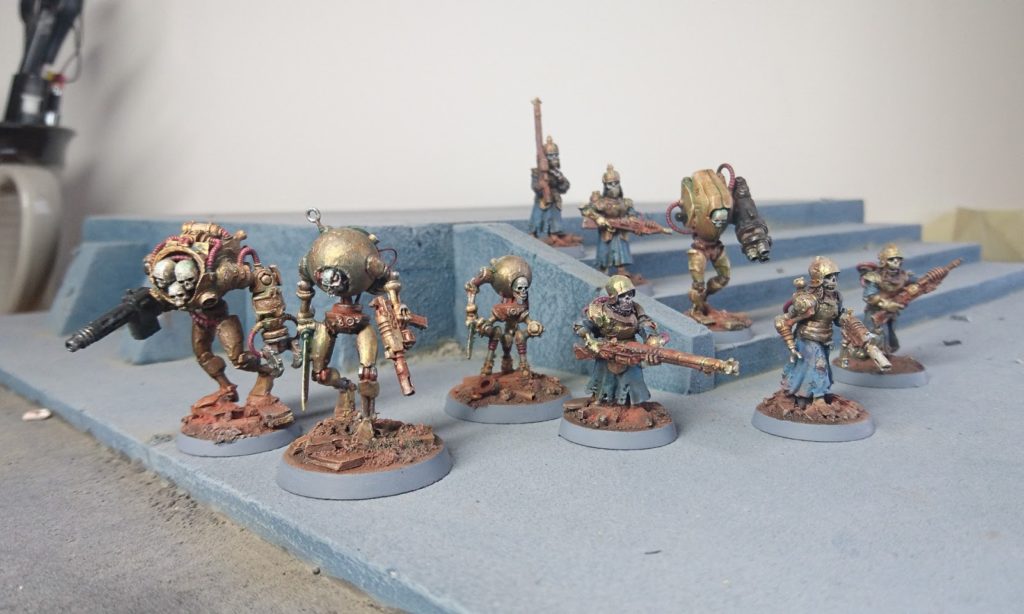 The boys in blue and white are going to have their hands full... In the campaign runner's words:

For 500 years, the savage ork clans – remnants of the great Waaagh Ukkuzargk – have battled each other brutally in territorial wars, isolated on Vulga Magnas Sub-continent of Simperia. Once wholly covered by the elegant spires and domes of the hive city Dagon I, Simperia lies in overgrown ruins since it´s deliberate obliteration by the planetary governor as a last attempt to halt the unstoppable Ork invasion. Prowled by shadows, mutants, seekers of lost relics and darker, deeper things, the vast remains of Dagon I have acted as a natural barrier between it´s greenskinned inhabitants and the passage to the outskirts of Dagon II. Now, singular sighting of ork parties near the parvelian gateway have been reported to the local administoria securita by scouting teams and passed on with great concern to the Arbitrary advisors. Investigations have been called for... 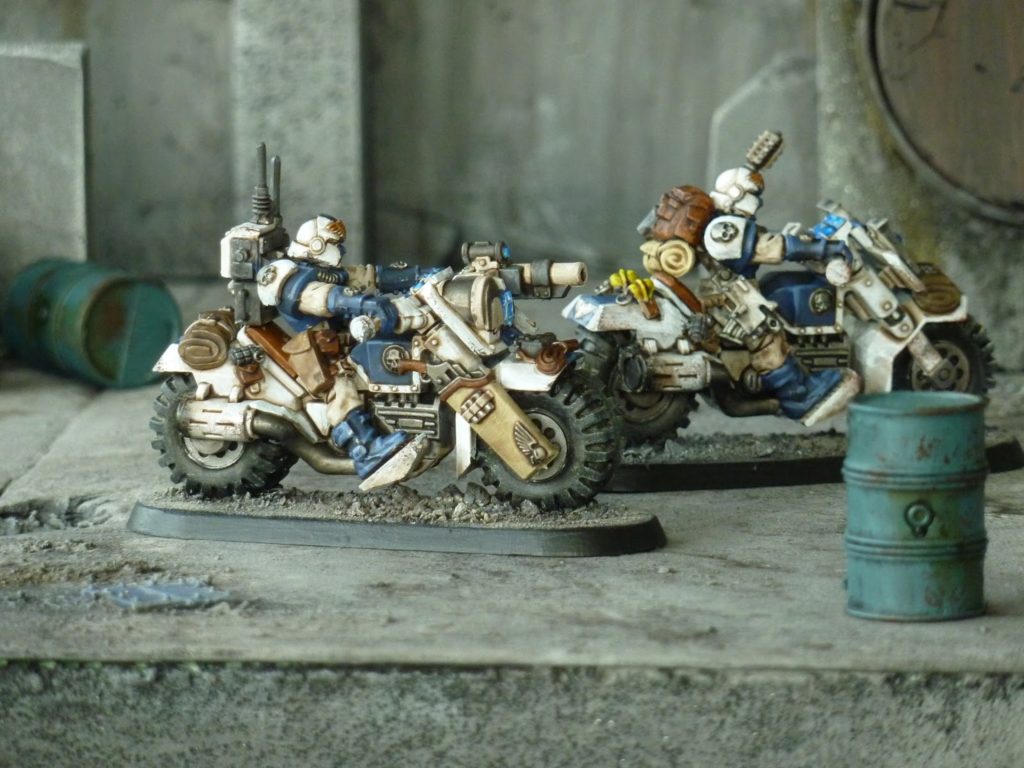 Marco and Paul the rusty robot king have a Facebook page between them, Minimoped, which you should absolutely check out here for progress on the various stunning Kill Teams and others that Marco, Paul and Wolfgang are working on. Paul is also the mastermind behind the Vulga Magnas campaign and you can find his blog here. 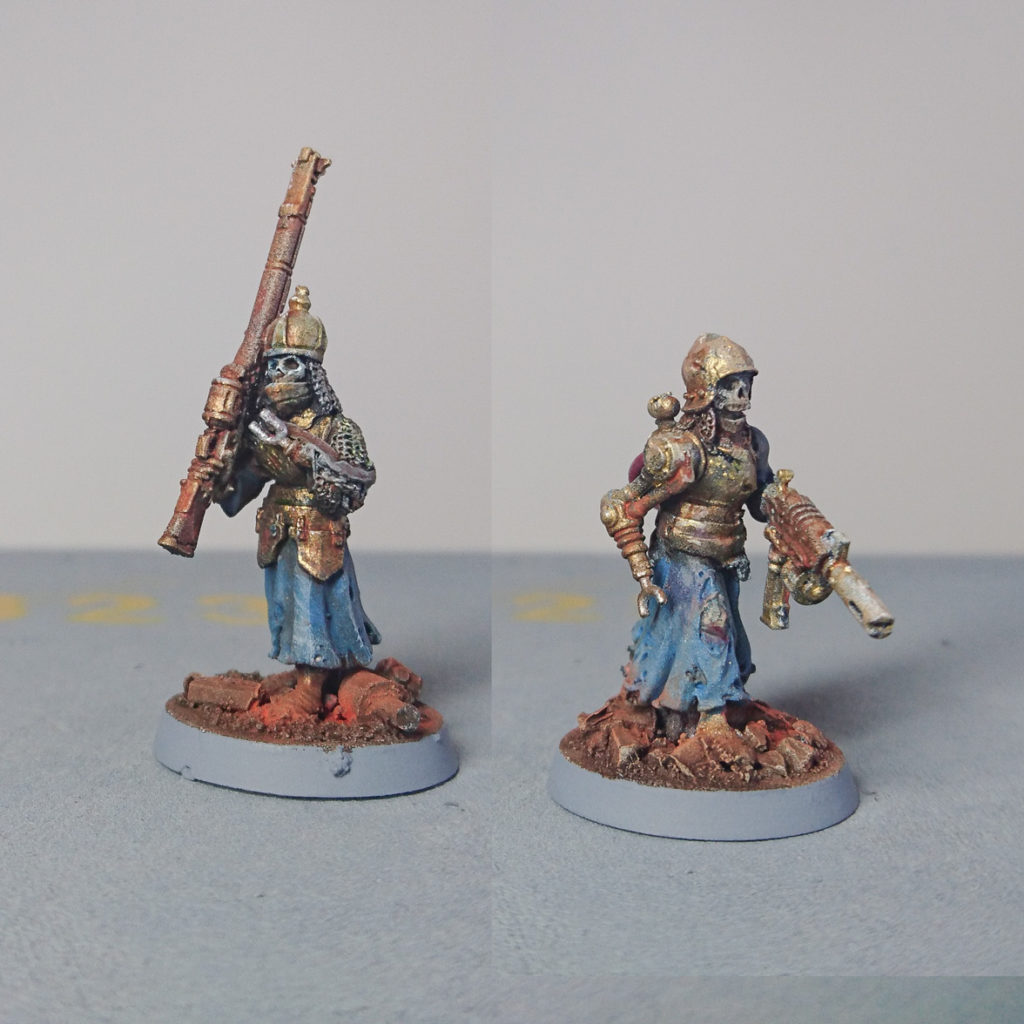 To wrap up, we've got some painting secrets from Marco that have been released on top level security. If you read them more than once, the Inquisition will come and turn you into a servo-skull and 10 cubic cm of fertiliser. Best presented in his own words, I wanted to know how his white armour comes out so damn crisp every time:

First of all, I don't thin my paints! My white is usually just white primer with a wash, in case of the Arbites a warm brown, (GW) agrax earthshade. Then the gw white comes really thin out of the pod, so you need maybe three layers to build up to pure white. I don't like a clean look on my minis so the white is always a shade of some grey or brown, just some small areas are really pure white.

And does he have any tips for an aspiring champion of paint? How about some wisdom to help us mediocre painters get a glimpse of the top?

[Levelling up your painting] is not so easy for me. I painted 5000 points of imperial fists and did not improve my skill like I did with 10 different models for my killteams. Try something different. Don't always use the same way to start a mini. Batch painting does not improve anything, that's my tip. If you want to paint a big army you have to, sure, but if you want to improve try different techniques, colours, and tools. and of course: listen to Duncan and thin your paints!!

Big thanks to Marco for taking the time to talk to us, and especially for being the first Markerlight victim. Cheers and good luck keeping the peace! 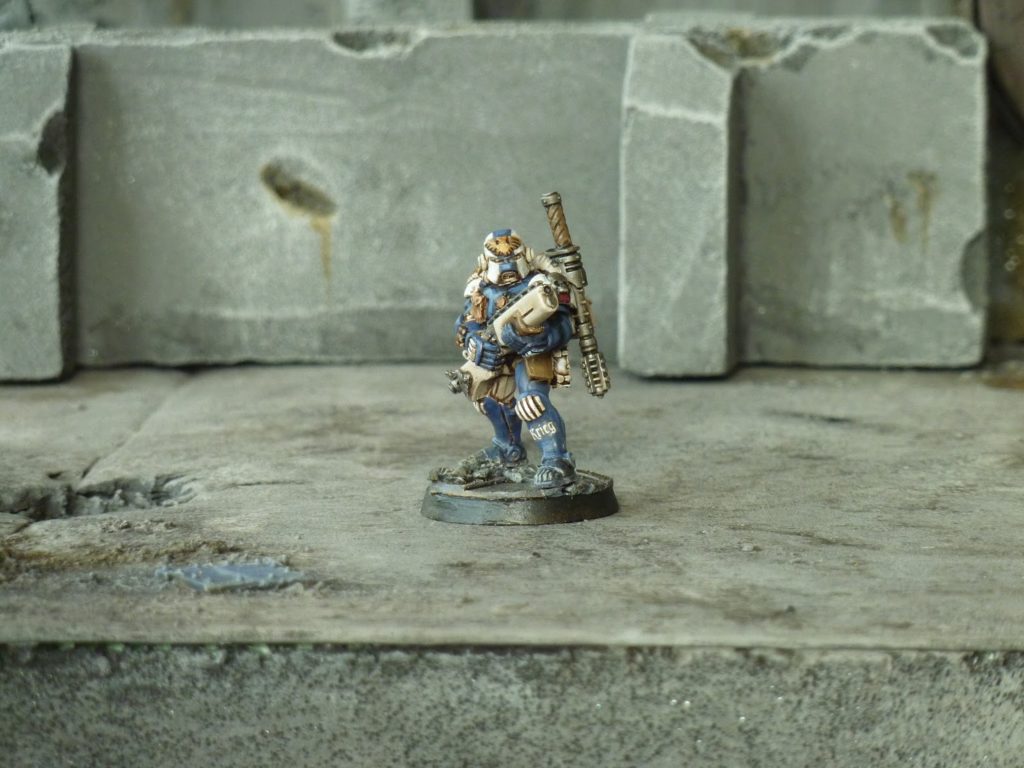 The trading groups that supplied the Arbites are this one and this one. 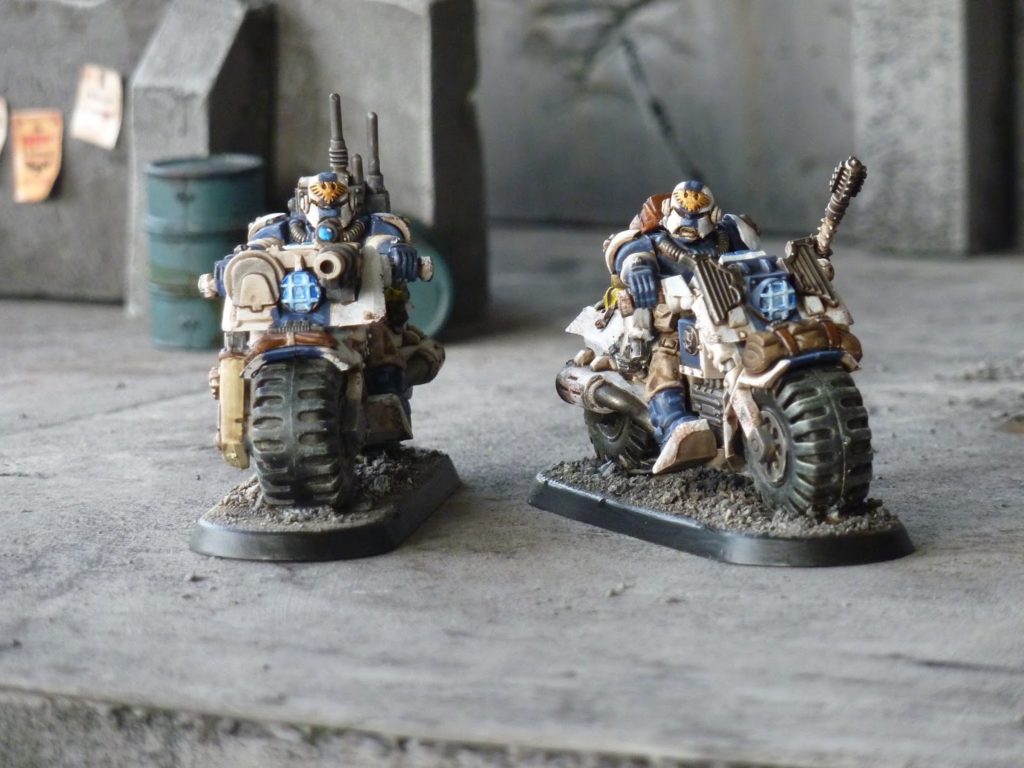 If you'd like to be featured in a future Markerlight here at Heralds of Ruin, or know someone who should be, tell Ash about it on facebook! Heralds of Ruin Facebook Group