Happy belated Hallowe'en, Heralds! Around a month ago, one of the other OG Heralds in the area challenged me to a spook-off - we each had to build and paint a Hallowe'en themed team in just FOUR WEEKS and then play the match on October 31st. Challenge accepted! 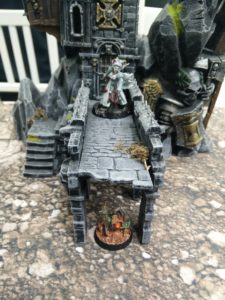 Our game would pit Sicaran Incursor Kronos Alpha-2 and his team of revenant Skitarii against Lady Erzebeth and her murderous brood of vampires and werewolves. After naval engagements in an outrageously irradiated warzone many decades before, KA-2 and his detachment ceased all contact with command. The next time they were seen, their sea green robes were tattered and flapping in the desert winds, stark against the dust of the bed of the ocean that had long since boiled away. Their flesh was gone, exposing grinning skulls, bleached bones and rusted bionics. Worst of all, perhaps, their binharic code was irredeemably shattered - driving the Skitarii ever onward to reclaim their flesh and blood, scavenging for hardware that their irradiated bodies invariably corrupted beyond any intended utility. Tactical logic circuits suffered, missions parameters became wildly skewed, and now the prizes at their mission's end are less and less appropriate for the repairs Kronos Alpha-2 has made it his personal crusade to carry out.

This may go some way towards explaining why, on a dark and stormy night on the planet Lludd, dust-dry shuffling feet made their way through the rusted desert of outlawed technology towards the imposing citadel of the Luddo-Tyrant Fjordh, intent on the necropolis beyond. They were not ready to meet the citadel's new occupants...

Lady Erzebeth, ancient, powerful, and entirely alone, had arrived a lunar cycle earlier to spread her insidious curse. From the shadows of three sleepless days and nights she stalked the occupants of Fjordh's baroque, mouldering castle, marking the strongest with needle fangs while they slept. With her brood selected, she dispatched Fjordh in an ravenous display of bloodletting, dropped his remains into an old plasma deconstructor and, as the pale sun rose over the techno-graveyard, she posted her guard and slept.

Lupine howls erupted through the desert, drawing wyrd echoes from the necropolis as the sun sank. A foe had been scented. 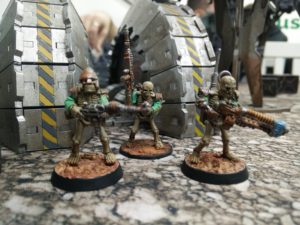 (The game was a hybrid of two Classic missions - Raid, as the revenant mechanicus were attempting to break into and ransack the necropolis, and using Last Stand deployment, as the tombs, graves and castle were clustered into a corner of our tech-desert and we didn't want to split our forces and lose all the cool infiltrating abilities!)

Wary of the fell howls on the air, the Skitarii spread out - small groups of Rangers and Vanguard supported by a Magos Auctoris Linguistica and the detachment's few remaining Fulgurite Techpriests. Of Kronos Alpha-2 and his chosen Incursion Elite, there was no sign. If the resistance thought the shadows were theirs, they would soon learn their lesson. Robed figures sprinted and flapped between the tombs of the Necropolis, and though they moved like scraps of shadow blown on the wind, a pair Rangers found their marks. The advance on the castle had begun. 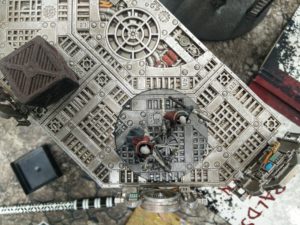 A razored moment later, and it had halted. A pair of the black-robed figures appeared on a high gantry as if from nowhere, launching a projectile from a gigantic crossbow and blasting the Auctoris off her feet and into the dust. Before the Skitarii could react, the White Lady and her lupine bodyguards were among them. Targeting the greatest threat, the hugely muscled werewolves leapt from their hiding places at the Fulgurites, claws and fangs shining, steely in the moonlight. Lady Erzebeth herself simply appeared as if from nowhere, shooting out one Ranger's cogitator-pan with a small crossbow bolt and slicing through a handful more with astonishing speed. 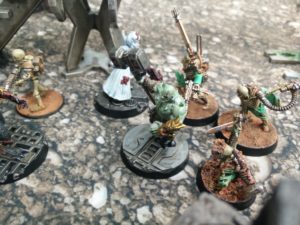 Caught unawares, but hardly defenseless, the Fulgurites powered up their weapons and struck. Though one of their number lay twitching in the dust, the remaining two wielded their electroleech staff and a screeching, rusted eviscerator to dismember two of the furred horrors, and a point-blank blast from a radium carbine dispatched another. As the two sides eyed each other warily, the ambush's intial impetus lost, a throbbing roar came from behind a disposal unit, and a true monster came hurtling toward the vanguard. Fjordh, swollen, broken in body and sporting two bolts in his green-tinged neck, sprinted with raised power hammer toward the Skitarii, and bones flew like feathers.

Clicking and buzzing through a tight-band comms channel, KA-2 sent his remaining Skitarii racing toward the tombs. He would deal with these thick-necked obstacles himself. Dragging his way from a thick dust dune, he led his Incursion Elite toward the melee, guns blazing and powered blades crackling. The Fulgurite who had lost his stave uncountable years ago duelled with a howling wolf-man on the very edge of the Necropolis, rusted chainblade and canid howls mingling in a horrifying cacophony. More vampiric acolytes of the Lady Erzebeth raced down from the gantry to overrun the Fulgurite, who held his ground, empowered beyond the remit of his frail skeletal form by the shedding of blood. 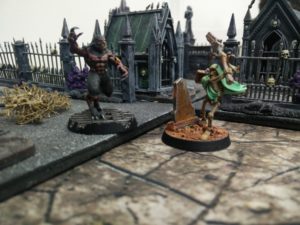 There was still the issue of the Monster, Fjordh. Caught in Erzebeth's thrall through her technomantic skill, he smashed apart the remaining vanguard and raced toward the single Skitarii that remained on their flank, repositioning his Transuranic Arquebus with almost human haste. He did not pull the trigger in time.

Calling to her acolytes to hold the Necropolis, the White Lady sped with her new bodyguard to dispatch the remaining Skitarii. Kronos Alpha-2 and the remaining Fulgurite had caught the Necropolis guard in a pincer attack, with three vanguard raining fire into them from behind. And yet - it seemed the pale moon guided the vampiric footsoldiers' aim while baffling that of the Mechanicus. As irradiated rounds and bursts of plasma knocked holes in the rotting masonry, more and more skeletal machine-troops fell. A final charge by the empowered Fulgurite, a storm of bullets and a crackling, blinding Voltagheist overload... and the priest still came onward, his eviscerator giving voice to a rattling scream as he hefted it high... then an explosion, a blasting charge trap to bring an entire mausoleum crashing down to finish the Fulgurite for good. 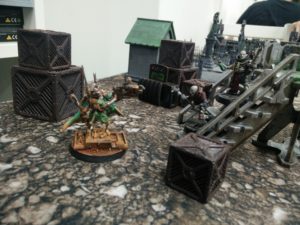 The White Lady would reign over the desert in peace, while her dark blessing spread to every corner of the planet and beyond. But out in the scrapyards and blast sites, fleshless fingers curled, and circuits sparked. Victorious or vanquished, the Dead are eternal.

So that was a blast! The Genestealer Cult proved much more capable of a good ambush in the end than the Infiltrators, but until the final disastrous Charge phase, I think it could have gone either way. Stay tuned for a much more in-depth look at both teams in Markerlight #3 and #4! The spook will return next year...

Teams were as follows:

Don't forget that the Terran Classic II: Winter's Tithe is next month! December the 1st - you can find all the details here. Come join us for a day of Heralds of Ruin, meet some great people and get some awesome goodies - winning not necessary (but encouraged)!