This is a very proud day for me, players. I'm pretty hyped to share it with you all. Get ready for an unusual tournament report and a new look at skirmish gaming in the 41st millenium! We hosted the first international Heralds of Ruin tournament, kicking off the Terran Classic series in the process. If you don't know about Heralds of Ruin, it evolved from Games Workshop's old Kill Team rules a few years ago, and grew into a huge community project.

It works like 40k, but puts the focus on the unsung heroes and villains doing the dirty work in the dust and the shadows. The games are a mix of Warhammer 40,000 brutality and Necromunda-like emphasis on the individual, with each model in a 250-point team a key player in its own right, and the ruleset allows for all sorts of climbing around, customising weapons, terrifying your enemies into submission or just throwing them off buildings! The game uses very dense terrain, and setting the tables up is an art form in its own right. We had a flurry of terrain building in the days leading up to the event and came up with some awesome battlefields. When Heralds of Ruin grips your imagination, it doesn't let go, and the fans are some of the most dedicated around. On the day we had the usual local contingent of players, a couple driving in from different corners of the UK and one player each flying from Milan and Barcelona! The weekend before we had Heralds campaign mastermind Rhett over to visit from Washington state, but the stars didn't align to get him here for the tournament. The practise games and pub sessions with these guys were some of the highlights of a weekend filled with highlights for me, especially as we've been working on various rulesets over the Internet for the better part of two years, without ever meeting!

Anyway, enough sentimentality from me. Onto the games!

Round 1 saw the teams searching a field littered with archeotech for the one device out of six which could turn the tables of the ongoing clandestine war in the far reaches and deepest undercities of Terra itself - the setting for our tournament! Space Wolf fought Space Wolf in a clash of opposing philosophies, with the Thunderwolf Cavalry of the Sons of Morkai proving decisive over the firepower of Tizca's Bane. The Italian Imperial Fists under Biker Sgt. Scipio got the better of a Breacher team from Vior'la sept in a brutal close-quarters firefight, despite an extremely valorous fire warrior charging and killing a plasma gun-toting biker. In an abandoned mag-trainyard the Death Korps of Krieg's stoicism and self-sacrifice ultimately proved futile in the face of the Plague Marines and crazed cultists of the Corpse warband. Meanwhile in a remote desert outpost, a squad of Iron Warriors were taken completely by surprise by a rampaging gaggle of Feral Orks, brought along by almost total newcomer Nathan, the store's Age of Sigmar champion. Mounted on boars and wielding stone axes, the savage xenos overwhelmed the ancient astartes with their sheer enthusiasm for a good scrap. We took a break from the killing for shawarma and the painting competition!

Two prizes were on offer, one for the Best Painted team and another for the Coolest Looking, focusing on skill and visual impact respectively. Most of the teams got at least one vote for one category or the other (I got one for each, thankyouverymuch) but we must spare a thought here for Charles and his Vior'la Breacher team, who were conceived, built, and painted all in about 36 hours. A sterling effort, but not something we give prizes for. Next time! In round 2 we fought the Last Stand mission, where a defender starts huddled in a corner with half their team, waiting for reinforcements to arrive while the attacker's full team presses the attack. My Chaos Space Marine team brought even more hurt to the wolves of Tizca's Bane, wiping them out to a man, with my Aspiring Sorcerer adding insult to injury by removing the final Fenrisian himself. Tizca's Bane, indeed... The Tau sat this round out with a Bye, while their conquerors from the previous game continued their trail of destruction, pinning the Feral Orks in place with a storm of bolter fire. Despite some spirited charges from the Beastie Boss, who eventually managed to rip through three bikes by himself, it was too little too late, and the Fists won again. The Heretic Legiones Astartes faced the Death Korps, and looked in a strong position, but overstretched at the last minute. Their weakling loyalist targets were badly bloodied, but casualties on both sides were unacceptable, and the game ended in a draw.

The third and final round brought the violence full-circle as we drew the Escalating Skirmish mission: the first mission almost every Heralds of Ruin player ever fought! Both teams are split into two, with reinforcements able to appear at almost any point on the table edge. My Aspiring Sorcerer faced off against the Plague Champion of the Corpse. Casualties on both sides were horrific, with my Soulreaper Cannon and Warpflamer making short work of anyone they looked at, and the Death Guard plasma gunner, blight launchers and Foul Blightspawn gave everything their side suffered right back to me. The Corpse and I are old adversaries, and it was a pleasure to be able to play against them in this historic event. The only downside was the game ending in an inconclusive draw! The Feral Orks and T'au faced off in a hilarious race for the high ground, warpigs and breachers racing up stairways opposite one another to be blasted to pieces at short range or flung bodily from rooftops. Firepower won the day in the end and the Orks were mercilessly and completely destroyed. The footslogging Space Wolves fought the Death Korps over the desert outpost, and despite the unfavourable conditions, the Wolves looked dominant throughout the game. When the dust cleared and we counted up the kill points, though, a 96-145 score meant that the Space Wolves had missed out on the win by a single point! Krieg stubbornness had snatched a draw from the jaws of defeat!

At the top table, titans clashed. Not really, titans aren't allowed in Heralds of Ruin. Our two Mediterranean visitors, Ivan and Mattia, in command of the Sons of Morkai and Kill Team Scipio respectively went toe-to-toe, bolter against axe, bike against wolf. Despite losing nearly half their number, the Imperial Fists stood defiant and claimed their third win of the day! In the end, Tizca's Bane took the highly-prized wooden spoon of defeat. The top three finishers were the Death Guard, the T'au Breachers and Kill Team Scipio of the Imperial Fists led by Italian visitor Mattia - our only undefeated player! The winners boasted first-printing Heralds of Ruin hardback rulebooks, which were duly signed and blessed or cursed, depending on faction, by all the other players. We even had a trophy, and store credit prizes for all the entrants. Nobody leaves empty-handed! Tired, hungry and dying for a drink, we packed up and headed to Down The Hatch bar for the Afterclassic party, and that, frankly, is where this story needs to end. We hope to see you in the Winter for the next edition! Until then, check out the Heralds of Ruin project's blog and free rules HERE! Full lists and standings from the competition can be found HERE 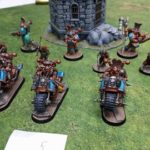 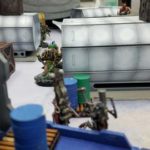 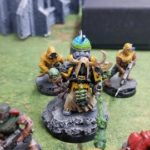 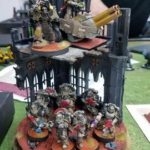 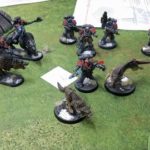 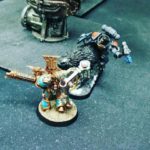 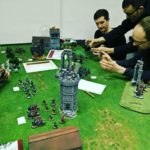